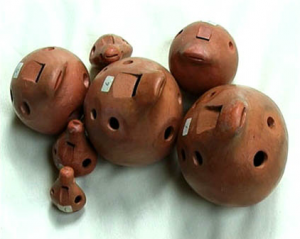 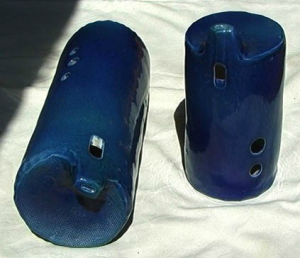 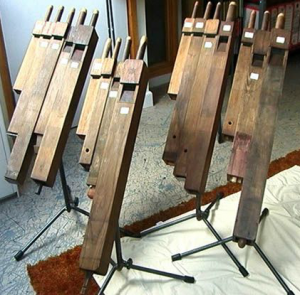 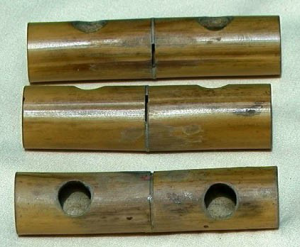 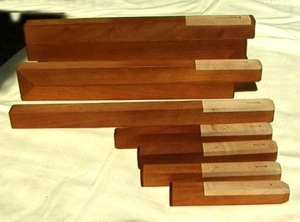 FR1  Bamboo transverse flute, producing five pitches just a fifth-tone apart from one another.
Built in 1975 for Melodies 3. Abandoned 1980.

FR2-FR8  Seven unglazed pottery ocarinas, various sizes and tunings, globular shaped.
Made in 1984 and used in After the Rain.

FR9-FR11  Three bass ocarinas in F, E and D. Glazed ceramics, one globular, the others cylindrical in shape.
Used in A Monkey’s Paw.

FR12-FR15  Four sets of pipes, one consisting of three, one of four, and two of five pipes.
Each set has its individual pipes bonded together to make a single instrument.
Each instrument is mounted on an adjustable metal stand. The pipes are heavily modified
organ flue pipes; some have added fingerholes. They are tuned equiheptatonically as a consort.
In performance they are not only blown but tapped with metal thimbles.
Used in The Fish that became the Sun.

FR16-FR19  Four wooden whistles designed to produce infinitely variable pitches between
g4 sharp and b4 quarter sharp.
Used in Out of the Shattered Shadows 1.

FR26-FR32  Seven individual concertina reeds each mounted within a wooden tube. Blown by mouth.
Used in Beneath the Fired City and Out of the Shattered Shadows 2.